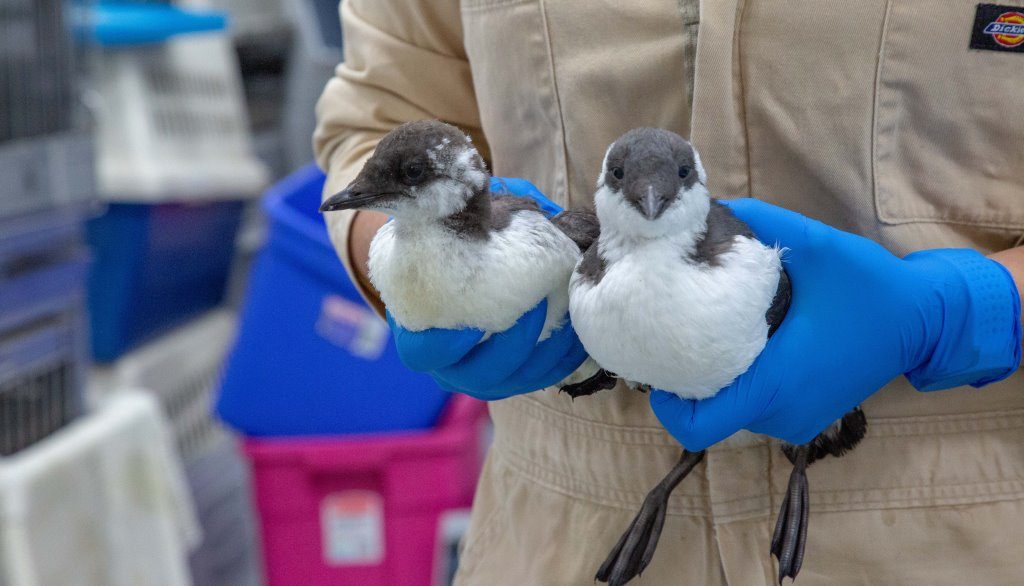 Newport, Oregon— The Oregon Coast Aquarium is treating an unusually high number of common murre (Uria aalge) chicks this season. The chicks, which are often mistaken for baby penguins, are being found all along the West Coast abandoned, deceased or in very poor health.

Just this week, the Aquarium received 3 chicks in addition to the 12 that were admitted in the last month, totaling 31 murres this year. In comparison, only one murre chick was admitted each summer in 2016 and 2017. International Bird Rescue in California and The North Coast Wildlife Center in Astoria are seeing a similar trend this summer—with over 100 combined cases since mid-July.

“A lot of these birds are coming in pretty thin from lack of food,” said Charlee Beck, Aviculturist II at the Oregon Coast Aquarium. “Since these chicks are supposed to be cared for by their parent, if they get lost or separated, then they are pretty helpless and will eventually starve or wash ashore.”

So is this a cause for concern?

Common murres comprise of around 60% of all seabirds that nest in the state of Oregon. Dense populations and high susceptibility to oil spills, gill nets and food availability make them significant indicators of environmental and human-impact issues.

The Yaquina Head Outstanding Natural Area in Newport is one of the largest breeding locations for common murres in Oregon, averaging around 80,000 birds. Oregon State University (OSU) has been monitoring nest success there for over a decade, and in the last five years, they have seen little to no reproductive success.

This year, that changed.

“This summer, we have monitored approximately 130 murre chicks that have gone beyond the minimal 15-day period of being fed and cared for by the adults on the rocks to be considered ‘fledged.’” said Christian Cortez of OSU’s Seabird Oceanography Lab. “In fact, there are still a handful of chicks that have yet to fledge (jump the rocks) to this day.”

What are the causes?

With higher fledge rates, “there are many more chicks out on the water to potentially run into problems and arrive on the beach. Mortality can sometimes be quite high if food conditions are poor at the time of fledging,” said Dr. Don Lyons of the OSU Seabird Oceanography Lab.

Seabird reproductive success is strongly linked to food availability. Many will remember the occurrence of the “Warm Blob” in Pacific Northwest waters from 2013-16. The lack of coastal upwelling associated with the heating of the Pacific Ocean resulted in a deficiency of nutrients crucial to support the marine food chain. Accordingly, a large common murre mortality event occurred in 2015 in addition to years of consecutive unsuccessful reproduction.

With local water temperatures cooling off in 2017-18, the reproductive success this year could be the result of the relative increase in food resources. Dr. Lyons explained that “observations of murres feeding chicks at Yaquina Head through early August suggested that food conditions were not great this year, but that they weren’t catastrophic, either.”

Researchers have documented largescale murre mortality events on the Pacific coast for decades. These mortality events fluctuate between years and disproportionately affect juvenile birds, patterns reflected by the cases seen by the Aquarium and other rehabilitation centers.

The past few unsuccessful reproductive years can also be attributed to the resurgence of bald eagle populations on the Oregon coast. “The eagles fly around the headland early in the morning and harass or attack the adult murres. Threat of a nearby eagle can be enough to scare an entire colony of murres out of their nesting spots,” said Cortez.

Cortez further explained that while the eagles continue to be a challenge this year, “most adult murres have chosen to remain on the rocky islands instead of abandoning their spots. A greater abundance in food could be an incentive for adult murres to invest in the welfare of their chicks.”

And the investment seems to be paying off, albeit the associated increase in deceased or starving fledglings. More murre chicks means more competition for limited food resources, leading to the higher mortality.

Similar to Yaquina Head, the Farallon Islands in Central California are a very popular breeding ground for common murres and other seabirds. Gerry McChesney, Manager of the Farallon Islands National Wildlife Refuge and Common Murre Restoration Project, reported that “it looks like it was a good season for murres—at least for them raising their chicks to colony departure.”

Unlike Oregon, California has seen a significant increase in murre populations in the last few decades, putting more pressure on food resources. “Die-offs of young-of-the-year in late summer and early fall is not terribly unusual, though it sounds like this year may be building to be an above average die-off,” said McChesney. “The central California population alone now numbers nearly 450,000 breeding birds. So, in a productive year, there’s a lot of murre chicks out there and if there’s not enough prey to continue supporting them, then the starvation events that can result can be pretty big.”

How can you help?

In summary, while there is no reason to be alarmed at seeing a beached murre in the next few months, juvenile or adult, higher fledging rates with limited food availability are indeed inundating your local wildlife rehabilitation centers with chicks.

People that find a wild animal they believe to be distressed should not approach or touch the animal. When in doubt, contact Oregon State Police at 800-452-7888, Fish and Wildlife officials, or qualified wildlife rehabilitators who can provide instructions on how to proceed and get the animal to safety if they feel it is appropriate.