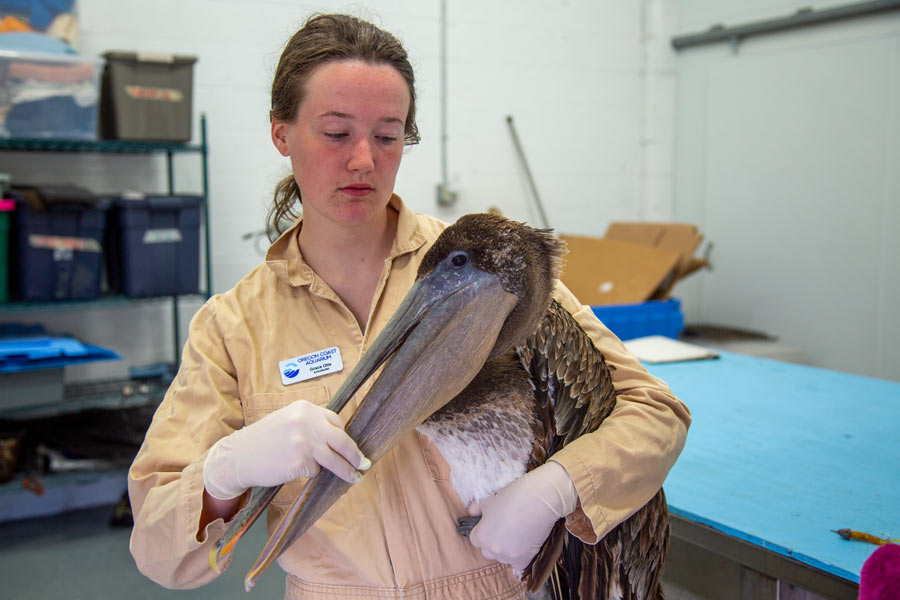 Newport, Oregon—The Oregon Coast Aquarium admitted a juvenile brown pelican Thursday night that was found snared in a fishing hook and line. Civilians transferred the large bird to the Aquarium after finding it severely entangled and in distress at Devil’s Punchbowl State Park.

Upon receiving the pelican, Aquarium Bird Staff immediately began triage to assess the condition and remove the large, deeply set hook with pliers. C.J. McCarty, Curator of Birds, noted that the juvenile bird appeared underweight and had likely been entangled for some time.

The hook snared the pelican’s wing in the tendon and through to the bone, with the line entangling the entire body. Staff cleaned and treated the wound with antibiotic ointment, set the wing in place, and then provided fluids for hydration.

Due to the nature of the injury, an Aquarium volunteer transferred the bird to the Wildlife Center of the North Coast Friday morning for further specialized care. As of this Tuesday morning, its condition is guarded, but the pelican is eating and gaining weight.

California brown pelicans, Pelecanus occidentalis californicus, are a subspecies of brown pelican. The breeding pelicans nest in California and Mexico, while non-breeding juveniles and adults disperse along the coast of North and South America, including Oregon, in the Spring.

Brown pelicans experienced a severe decline in population in the 1960s and 70s due to eggshell thinning caused by the pesticide DDT. Since the banning of this substance, brown pelicans have recovered (and were delisted from the Endangered Species Act in 2009), but they still remain vulnerable to food availability, habitat loss and as seen in this case, human disturbance.

People that find wildlife that they believe to be injured or in distress should not approach the animal. Contact Oregon State Police at 800-452-7888, and they will provide instruction and coordinate the appropriate response.