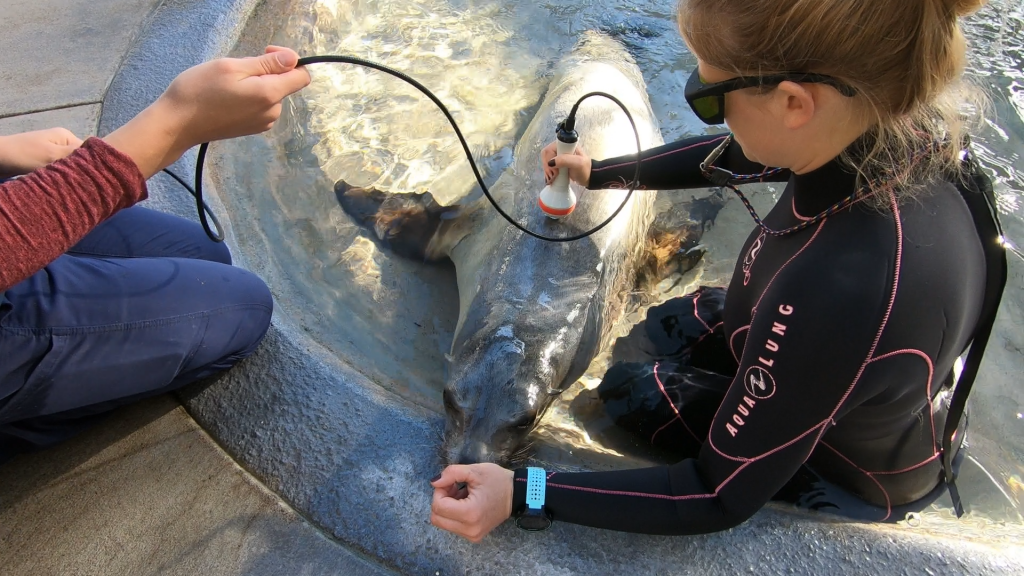 Newport, Oregon – Geriatric care is a little talked about but essential part of care for our pinnipeds. Most people don’t consider their late twenties as ‘old age’, but for sea lions and seals, they’ve already begun to receive over the hill cards. And just like humans, their geriatric years require special care and evaluation.

Animal welfare is a top priority here at the Oregon Coast Aquarium, but as an animal gets older these needs change. Sea lions will typically begin to show geriatric signs in their early 20’s, while harbor seals start to show around their mid 20’s. Signs usually appear in the form of vision loss due to cataracts and arthritis, which lead to slower movement or not utilizing a flipper as much as they used to. When these symptoms present themselves, a radiograph is taken and a formal diagnosis can be made.

Specific geriatric care for our pinnipeds vary, depending on the individual animal’s needs. Quill, one of our sea lions, is 29 and receives geriatric care for her arthritis and cataracts. In the past, Quill was on a variety of medication to help improve her quality of life, however she was still on a decline, which led the husbandry staff to look into alternate methods of treatments. Today, her arthritis treatments include things like acupuncture, physical therapy, laser therapy, and chiropractic care. Daily physical therapy includes activities like encouraging unusual swim patterns, muscle massages, and rotation of flippers to improve range of motion. Weekly laser therapy primarily requires her to be able to lie still for a duration of time while a trained veterinary technician applies treatment. Laser therapy aids in not only arthritic care, but also in the case of injuries. Chiropractic care is delivered by a specialist from Willamette Veterinary Hospital, and is utilized for a variety of our pinnipeds. Quill receives it on a weekly basis, while our other geriatric sea lion, Max, receives it once every three weeks. After starting these various therapy techniques, Quill was able to stop taking all of her pain medications for arthritis, and now moves better than she did when she was 26.

Quill’s wellbeing is measured in a variety of ways. The easiest indicator is her energetic vocalizing after completing a behavior or while interacting with mammalogists. Typically, this is a behavior that isn’t reinforced, although as she has gotten older the first sign she gives if she is in pain or uncomfortable is not energetically vocalizing during her training sessions. This is typically followed by not moving as frequently and then having a decreased appetite. Once she is eating well and moving better, she will start vocalizing in a way the mammalogists know she is feeling comfortable again. On a physical level, her mobility and quality of life are monitored and kept track of in welfare assessments. These assessments are done for all of our animals, Aquarium wide, hers focuses on her geriatric needs and the more individual care she requires. This means monitoring her range of mobility; comparing against a chart that measures flipper height, or some of the unusual swim pattern routines. She is weighed every other day, while the other pinnipeds are typically weighed only once a week.

When it comes to cataracts, Quill’s are the most advanced of our pinnipeds. While surgery is an option, she receives eye drops instead, because her old age presents potential risk during surgery. Mature cataracts can cause blindness, like with Quill, who has little to no sight. Our other 29 year-old sea lion Max has non-mature cataracts and thus still has his sight, though he has difficulty seeing in direct sunlight. Husbandry staff are installing additional shade structures to the pinniped habitat to increase quality of life for all the pinnipeds.

As for harbor seals, we currently have five receiving geriatric care. Miller and Elvis, 24 and 26 respectively, have begun to show signs of cataracts and slowing down that is associated with old age. Boots, 31, receives chiropractic care every six weeks for her arthritis. Both Boots and 33 year-old Pinky have had their lenses removed in surgery from a pinniped eye specialist. Post-surgery they went from not being able to see, to being able to catch a fish thrown at them with ease. Skinny is our oldest harbor seal at 44, and shows no signs of arthritis. She does have some vision loss due to cataracts, however, it’s amazing how well she is aging.

As part of their general training, all of the pinnipeds are trained to receive check-ups and radiographs from a young age. This means being able to do tasks like lying down on cue, holding specific positions for certain durations of time, or lifting a body part in a certain motion. This can be used for voluntary blood draws, assessing injuries, dentistry, and various medical treatments. Ultimately, the most important aspect is to build and maintain strong relationships between the animals and the husbandry staff. Because the animals feel safe and trust their keepers, the husbandry staff is able to monitor and maintain their wellbeing.