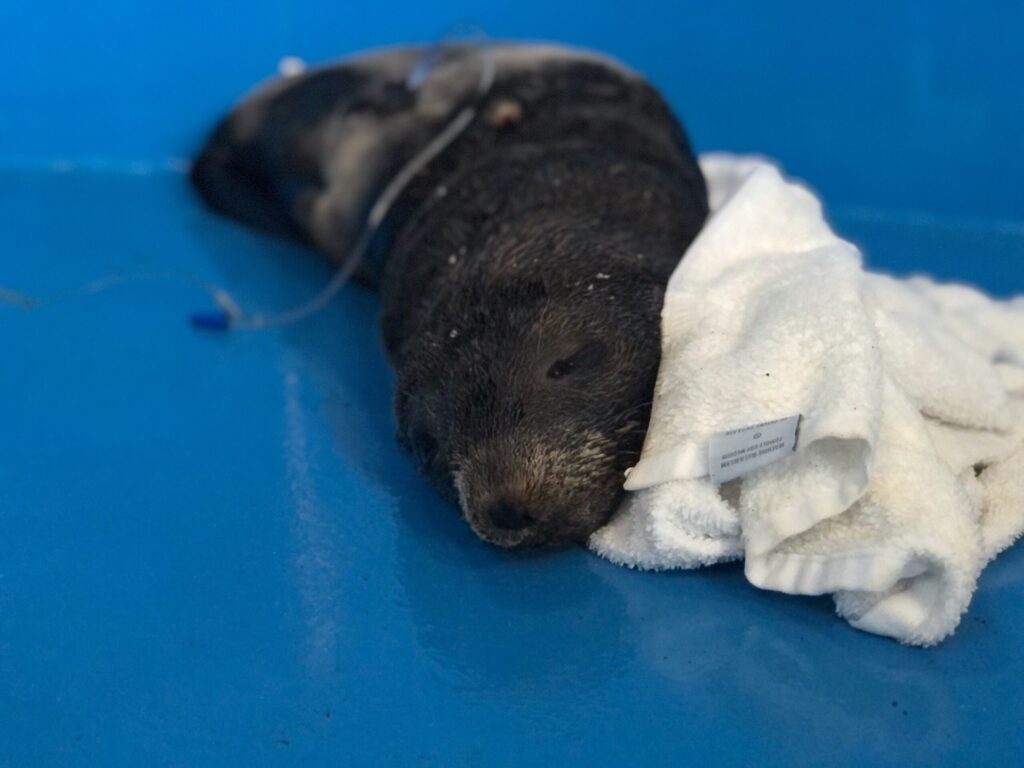 Newport, Oregon — An injured Guadalupe fur seal is on the road to recovery thanks to the collaborative efforts of the Oregon Coast Aquarium (OCAq), the Marine Mammal Stranding Network (MMSN), and SeaLife Response, Rehabilitation, and Research (SR³).

The seal, a male yearling, was found stranded on Salishan Beach and reported by a private citizen to Jim Rice, Stranding Program Manager with the Marine Mammal Institute at Oregon State University. Rice and Research Assistant Charles Nye responded to the call.

The seal was identified as a Guadalupe fur seal, a threatened species protected by law in the United States. The animal was lethargic and entangled in marine debris. After disentangling and assessing the seal’s condition, Rice determined the seal needed additional care, and contacted OCAq.

Once entangled, Guadalupe fur seals experience extreme fatigue and are unable to feed effectively. The seal was dehydrated and emaciated upon his arrival to OCAq. Staff administered antiseptic to the wounds caused by the marine debris and provided him with fluids and nutrients.

OCAq partners with other animal rehabilitation facilities to ensure stranded and injured wildlife have the best possible chance at survival, rehabilitation, and eventual release. The Guadalupe fur seal was transported to SR³, based out of Washington state, where he will continue to receive care. SR³ operates the SeaLife Rescue Center, the Pacific Northwest’s only hospital dedicated to marine wildlife.

Guadalupe fur seals live in waters off southern California and the Pacific coast of Mexico, and are often observed feeding in Oregon waters.

This Guadalupe fur seal’s survival is thanks to the dedication and collaboration of private citizens, volunteers, and wildlife professionals and facilities. OCAq is committed to Oregon’s marine wildlife, and will continue these efforts with the belief that even one saved animal can help species recovery.

To increase our capacity for wildlife rescue and rehabilitation, the Oregon Coast Aquarium is building a new Marine Rehabilitation Center.