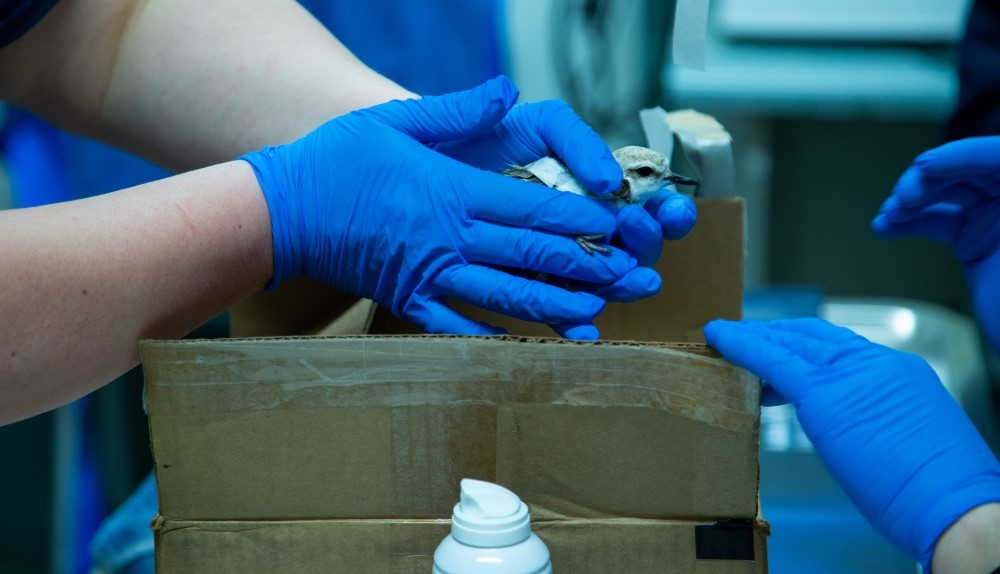 After cleaning the wound, stabilizing the wing and taking X-Rays, Aquarium staff transferred the plover to Wildlife Center of the North Coast, where a wildlife veterinarian diagnosed a few day-old compound fracture in the humerus. Due to the small size of the shorebird and nature of the break, the condition is guarded, but she appears to be eating fine and gaining weight. 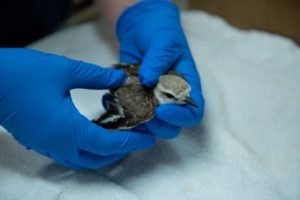 ORBIC has been monitoring the distribution, abundance and productivity of snowy plovers along the Oregon coast for over twenty-nine years.

“This female in particular was born in 2015 at Oregon Dunes Overlook and stayed in the same area to breed as an adult,” said Daniel Farrar, the ORBIC researcher that found the injured plover. “Last year she successfully raised a chick on her own, which is somewhat rare as males usually rear the chicks. The year prior, two of her chicks fledged under the supervision of her mate.”

The Western snowy plover, listed as a federally threatened species since 1993, can be found along the entire Oregon coast. From March to Mid-September, certain Oregon beaches restrict public-use activities to protect nesting snowy plovers.

Snowy plover nests are especially vulnerable because the eggs are laid right on top of the sand. Humans, dogs and unusual sounds can frighten the adults, leaving the eggs or chicks exposed to the elements and predators.

Visitors are encouraged to read signage that identifies prohibited activities at certain beaches, like bringing dogs, bikes or kites. You can also minimize disturbance to the birds by staying on the wet sand area of the beach. A complete list of designated snowy plover beaches and their regulations can be found here, including a list of dog-friendly places to play.

Thanks to active recovery efforts, predation management and beach restrictions, the number of snowy plover eggs and fledglings in Oregon has consistently 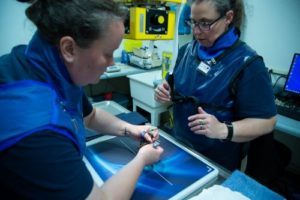 increased, and plovers are again nesting on beaches where they have not been seen for many years. By staying informed and planning your trip to the beach ahead of time, you contribute to Western snowy plover species survival.

Several Western snowy plovers have been rehabilitated and released by the Oregon Coast Aquarium in the past few years. Last year, the Aquarium treated over 230 wildlife cases. The facility relies on visitation, grants, and donations to finance its annual operations, including the Wildlife Rehabilitation Program. To help support the Aquarium’s rehabilitation efforts, please visit www.aquarium.org/support/make-a-donation.

The Oregon Coast Aquarium creates unique and engaging experiences that connect you to the Oregon Coast and inspire ocean conservation. An accredited Association of Zoos & Aquariums institution, this 501(c)3 non-profit organization is ranked as one of the top 10 aquariums in the U.S. Visit us at 2820 S.E. Ferry Slip Rd., Newport, OR. www.aquarium.org, 541-867-3474. Follow us on Facebook.com/OregonCoastAquarium for the latest updates.