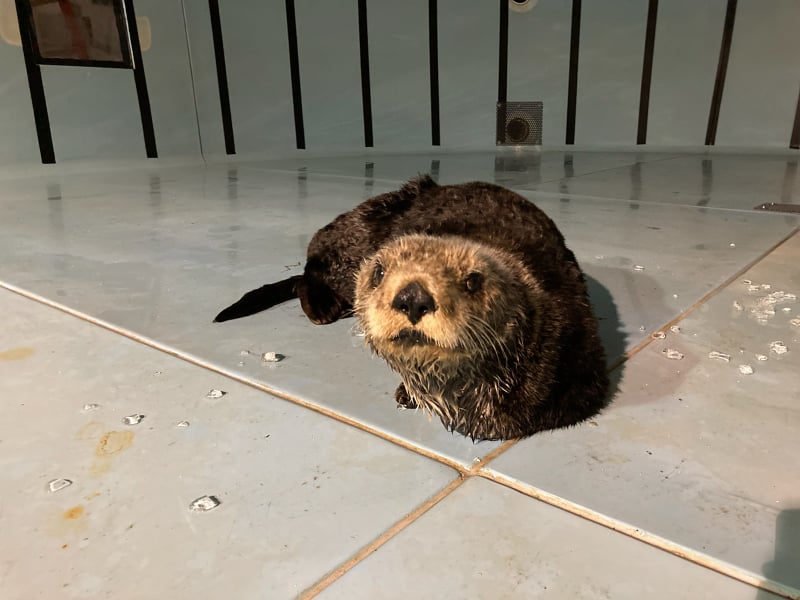 Notice: this story was edited on December 06, 2021. Please scroll down to see the most up-to-date information.

Newport, Oregon — An injured sea otter that hauled ashore on Cobble Beach at the Yaquina Head Outstanding Natural Area is now under assessment and care at the Oregon Coast Aquarium (OCAq).

The sea otter was observed hauled ashore by Chief Park Ranger Jay Moeller, who then alerted Oregon Coast Aquarium staff. After receiving authorization from the United States Fish and Wildlife Service, OCAq staff coordinated with Jim Rice of the Marine Mammal Stranding Network to retrieve the animal and transport it to the Aquarium for triage and immediate care.

During retrieval, staff observed that the sea otter had limited mobility, poor fur quality, and multiple wounds. After it was transported to OCAq, staff determined the sea otter to be an adult male, weighing in at about 64 pounds. Staff noted he was emaciated; a sea otter of his size should weigh between 75 and 85 pounds. While the sea otter was under anesthesia, staff were able to thoroughly examine the animal. It was determined he sustained lacerations and puncture wounds prior to hauling ashore, one of which was close to a vertebrae, likely causing his reduced mobility. While the exact cause of the damage is unknown, the injuries are consistent with those of a shark bite. The sea otter is currently being treated for infection, and husbandry and veterinary staff will continue to monitor the animal.

While he is alert and accepting food, his prognosis remains guarded. OCAq staff are limiting human interaction as much as possible in order to mitigate any stress to the sea otter and potentially prepare him for release.

“The next few days will be critical in his recovery path and we hope to see his odds improve daily, but it is too early to predict this,” said OCAq’s Director of Husbandry Jim Burke. “Our veterinary and rehab staff will do all we can to act quickly to improve his chances of release back into the wild.”

The Aquarium is one of three wildlife rehabilitation facilities in the Pacific Northwest, and the only one in Oregon, authorized by the U.S. Fish and Wildlife Service to provide specialized care to endangered marine life, including sea otters. To accommodate increased marine life rescue and improve conditions for ongoing care and rehabilitation, the Aquarium plans to build a Marine Rehabilitation Center for animal husbandry and veterinary staff to provide critical care to injured or stranded marine wildlife.

Sea otters were extirpated from Oregon in the early 1900s, as they were hunted to support the fur industry. While there is no longer an established population off the Oregon coast, individuals from Washington populations have been spotted in Oregon waters. These individuals are typically males traveling along the coast in search of potential mates.

Over the past several weeks, a lone sea otter has been observed bobbing along the waves near the Yaquina Head Outstanding Natural Area. The injured sea otter is believed to be the same individual.

“This sea otter means a lot to many of us Oregonians,” said OCAq’s Curator of Marine Mammals Brittany Blades. “I never thought I would get to see a live sea otter living on the Oregon Coast until 3 weeks ago when I saw this otter swimming, foraging and sleeping around Yaquina Head.”

While the sea otter was initially alert and accepting food, the status of an injured animal can quickly change, and his injuries ultimately proved fatal. The sea otter passed away after his third day at OCAq.

“Rehabilitation of stranded animals can be very challenging, as they are medically compromised when they arrive at our facility,” said OCAq’s Director of Husbandry Jim Burke. “Our team put in a great effort with diagnostics, treatment and care, but the underlying conditions were too great to overcome.”

The sea otter will be sent to a United States Fish and Wildlife Service veterinary facility for a complete necropsy.

“This otter has given all of us a glimmer as to what it would be like to have sea otters return home to the Oregon coast,” said OCAq’s Curator of Marine Mammals Brittany Blades. “He has contributed to the science of understanding and caring for sea otters.”

OCAq is committed to the rescue and rehabilitation of indigenous wildlife. The Aquarium will continue these efforts to save endangered species, with the hope that even one saved animal can help species recovery.