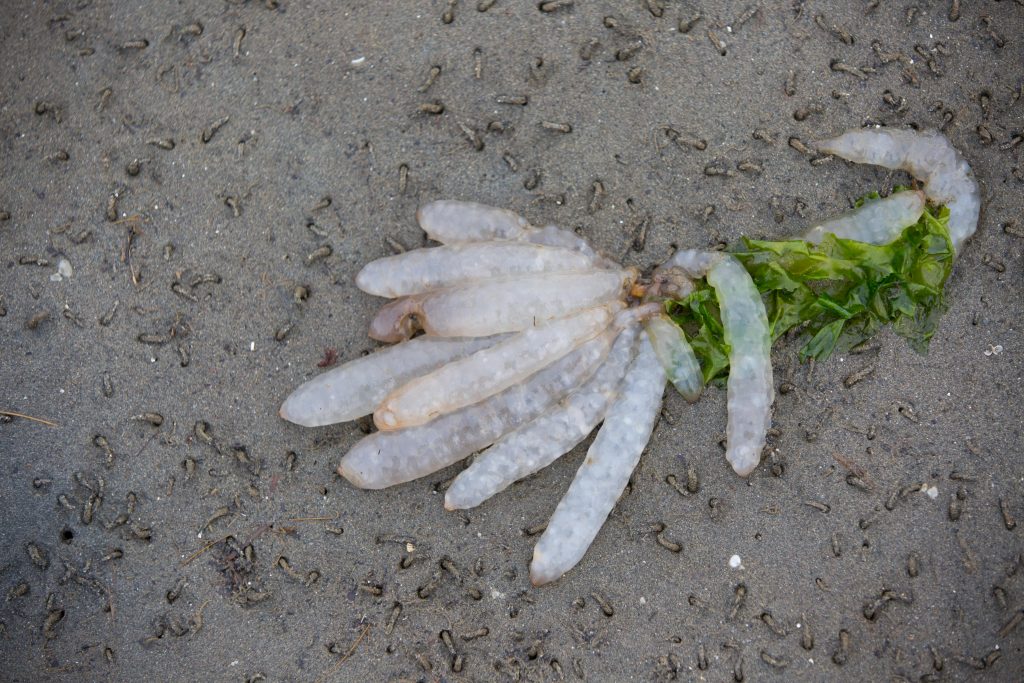 Lately the Aquarium has been receiving a lot of questions about these translucent sacs being found along the Oregon coast. And no, we’re not talking about those pickle-like pyrosomes.

The sacs can be found in a cluster, akin to a bunch of grapes, or as individuals. If observed closely, you can just make out a honeycomb pattern within.

The internal structure provides the main clue that this is an egg sac, as it is even possible to spot some of the tiny eggs inside—the tiny eggs of Loligo opalescens, or the market squid!

We talked to squid expert Dr. Louis Zeidberg at California State University in Monterey Bay in order to learn more about the cephalopods that produce these ubiquitous eggs.

Hi Dr. Zeidberg, thank you for speaking with us today! Will you tell us a little about market squid?

No problem. This species is called the California market squid, which live nearshore and are called myopsis squid due to the presence of a cornea in the eye. There’s also an Atlantic species, which is slightly bigger and was separated from this species when Panama closed up.

Are these the same squid as the calamari we are served at local seafood restaurants?

You can find out pretty easily if you have the full squid body on hand—poke around the eyeball to check if it has a cornea.

Uhm, we may pass on that. But maybe one of our followers can try that tip and report back…

Well, there’s a good chance that they could end up on your plate, but it’s a global market. They catch them here, freeze them, and then send them to China for the actual packaging, where they’re then shipped around the world.

Good to know! What about their eggs—how are they produced, and why do they come in such strange looking capsule structures?

The female market squid has a special egg capsule-laying structure adjacent to its ovaries that makes the capsule. While more oceanic squid, like jumbo squid, make amorphous blobs that sort of float in the open ocean, nearshore squid such as these make a heartier capsule. Because they’re produced in shallow water where there’s waves and surge, they probably have this protective coating to keep them from getting smushed. The capsules also potentially contain bacteria that mom lays that provides a sort of anti-predator, anti-microbial infection defense.

Scientists found that in the Atlantic species, there are chemicals inside the capsule sheet that are sexually activating pheromones. When the capsules are on the sea floor, the other squids who haven’t started mating yet will rub their bodies against them, which will stimulate them to start laying eggs. Evolutionarily, it’s probably a good indicator that these eggs are doing well as it stimulates the species to keep reproducing.

Another interesting fact – you can actually have multiple paternity in one egg capsule.

The female squid can lay eggs from multiple males?

The largest males, called guard males, will put a package of the sperm inside her mantle cavity near where the capsules first form. Smaller males will get aggressively fended off from this behavior, but they’ll sneak in from the front. Mom also has a pocket underneath her beak and inside her crown of arms, so the sneaker males can come and put their spermatophores in there. A female lays about 50-300 eggs, and we think a female can lay about 20 capsules total.

A lot of people ask what to do if they find the eggs on the beach. Can the squid survive if they’re put back into the water?

Not sure. Sounds like a good experiment for an Aquarium to test! But it definitely can’t hurt.

Are the eggs a good food resource for other beach and marine critters?

I’ve seen sea stars and a few fish eat them, but mostly the fish are just picking at them and hoping they’ll hatch so they can scoop the larvae up. So not really. By and large, they probably taste horrible because of the bacteria in the egg capsule. But once they hatch, if there’s fish around, every fish will be like, “oh, is that baby squid?” and go to eat it.

Any other interesting facts about the market squid?

One way to tell the males from the females—when they’re mating, the females will display a rainbow stripe underneath their fin. People seem to like that fact.

They also feed with a tentacular strike. The squid visually orient themselves toward the prey item and create a cone with their eight arms, sort of like aiming for the prey. Then they open the tips of their arms, and with their fast twitch muscles, shoot out their two tentacles to hit whatever they’re aiming at. The tentacle clubs have suckers on them to grab the prey, and then they retract and manipulate it into the beak.

Very interesting. Well thank you very much Dr. Zeidberg! If you would like to see some market squid eggs for yourself, we’ve been seeing a lot while tide-pooling along Seal Rock and Ona Beach just 10 minutes south of the Oregon Coast Aquarium.