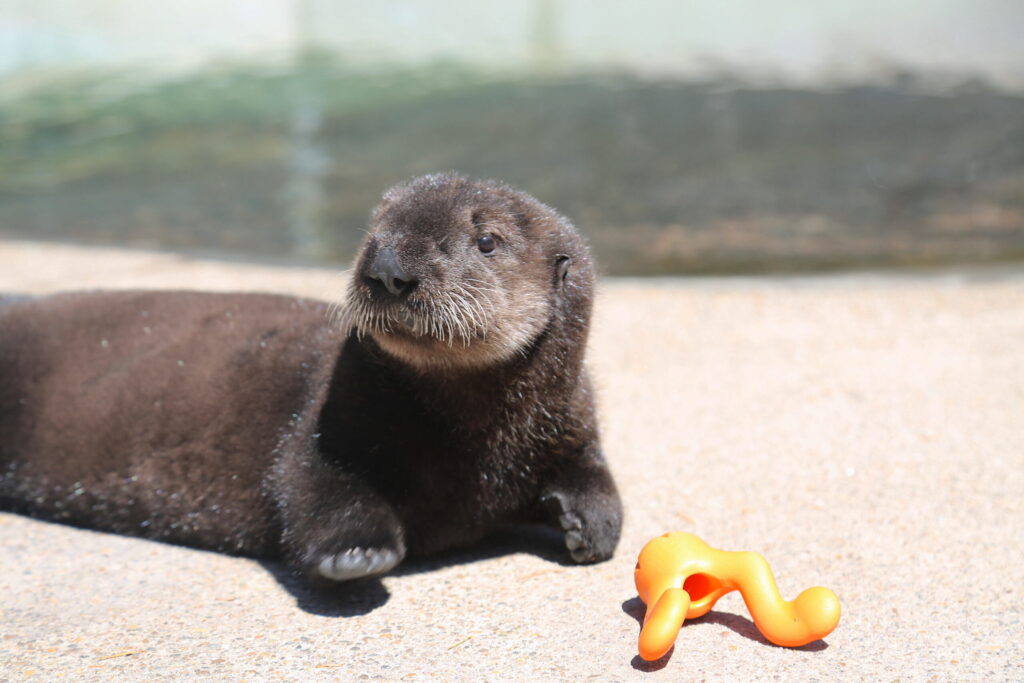 Earle was found stranded at Asilomar State Marine Reserve in Pacific Grove, California in May of 2021. Earle was cold and lethargic, and his mother could not be located. The cause of Earle’s stranding is unknown, and at just three weeks old and weighing about 6.5 lbs, the pup would have been unable to survive on his own.

Earle was taken to Monterey Bay Aquarium where he received treatment and ongoing care. While surrogate sea otter mothers have been used to rear and prepare stranded pups for eventual release to the wild, there were no surrogates available to care for Earle at the time. As such, he was deemed non-releasable by the U.S. Fish and Wildlife Service (USFWS).

The Oregon Coast Aquarium is one of only 15 organizations in the U.S. authorized to accept rescued sea otters, and the goal is to always have a space available for those that cannot be released. Once it was determined that the Aquarium would be Earle’s new home, a plan quickly unfolded to prepare for his arrival.

To expedite Earle’s transport, a flight was coordinated with the non-profit organization Turtles Fly Too. The network’s mission is to coordinate the use of general aviation to transport endangered species, critical response teams, and to educate the community on marine life conservation.

Turtles Fly Too coordinated with each of the organizations and USFWS to facilitate Earle’s transport from Monterey Bay Aquarium to the Oregon Coast Aquarium, securing pilot and aircraft, transport permits, and departure and arrival logistics at airports. “Turtle Flier” Peter T. Lewis, who hails from Santa Barbara, California, contributed his time, talent, and Daher TBM 700 aircraft to fly Earle to his new home.

“We specialize in transporting endangered species, yet Sea Otter 918 [Earle] challenged us with lower temperature needs, medical team support during flight, and securing a high-speed aircraft to reduce the risk for our special passenger,” said Leslie Weinstein, President of Turtles Fly Too.

On July 22, Earle took flight. The Aquarium’s Curator of Marine Mammals Brittany Blades, along with Willamette Veterinary Hospital’s Dr. Dan Lewer, assisted in the transport. They closely monitored Earle’s health, and took measures to make the flight as comfortable as possible for the pup.

The impact of Earle’s journey is widespread; not only will he act as an ambassador in teaching guests about his wild counterparts, but the collaborative efforts of those involved will increase the capacity to rescue and rehabilitate other pups.

“The U.S. Fish and Wildlife Service appreciates the team at Monterey Bay Aquarium for their diligent work to save and care for this young sea otter pup, while securing a permanent home for him at Oregon Coast Aquarium. We also thank Turtles Fly Too for stepping up to provide safe transport of the pup from California to Oregon. This transport is making room for the next stranded pup that comes in to Monterey Bay Aquarium, and potentially freeing personnel to care for a pup that has a chance to be released. Though non-releasable, this pup will help make people aware of the challenges that face southern sea otters in the wild,” said Lilian Carswell, Southern Sea Otter Recovery and Marine Conservation Coordinator of the U.S. Fish and Wildlife Service.

Upon landing, Earle was greeted by Aquarium staff. He was then quickly transported to his new home, where he was aptly named after Sylvia Earle, an oceanographer, scuba diver, and research scientist dedicated to conservation.

Earle is currently located behind-the-scenes, where he is settling in and learning typical sea otter behavior. Aquarium mammalogists will continue to monitor Earle to ensure he is acclimating well, and will soon introduce him to the other members of the sea otter raft.

“We are so excited to welcome Earle to the Aquarium,” said Blades. “His survival story really speaks to the amazing things that happen when people come together to support wildlife. Earle will act as an ambassador for his species, connecting guests with ocean life and inspiring conservation. That connection is crucial to the protection and preservation of sea otters and other endangered species.”

What’s Earle Up To Now?

Want to see what Earle’s up to behind the scenes while he’s in otter holding? Check out our Earle live camera!