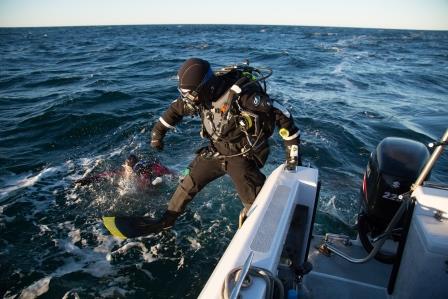 It’s 7:00 AM. The sun just begins to glimmer over the surface of Yaquina Bay, where the Oregon Coast Aquarium’s research vessel, Gracie Lynn, gently rocks in its slip at the Port of Newport.

Jim Burke, Director of Animal Husbandry at the Oregon Coast Aquarium, arrived about 30 minutes ago to finish loading supplies for the day’s dive operation: miscellaneous SCUBA gear, datasheets and a cooler of fried chicken picked up that morning at the local grocery. You can’t have a dive survey day without fried chicken.

The rest of the Aquarium dive team and Oregon Department of Fish and Wildlife (ODFW) researchers gradually arrive at the dock and file onboard Gracie Lynn to find their seat for the hour long ride to our destination, the Cascade Head Marine Reserve. There is anticipation in the early morning air, albeit tinged with sleepiness, for the long day ahead.

The next eight hours will be spent conducting dive surveys of marine life, retrieving SMURFS (Standard Monitoring Units for the Recruitment of Fishes), deploying underwater cameras and measuring ocean parameters. Ocean conditions are unpredictable, and Oregon waters are especially known for low underwater visibility. Burke remarks that often when diving you can’t see your hand in front of your face, let alone identify fish to species from a couple of meters away. So the team makes the most of clear June days like today, ideally a day or two after a storm, where visibility is high and waves are low.

And a little sunshine never hurt morale, either.

Although this is the Aquarium’s 65th trip and 406th dive since they began collaborating with the ODFW Marine Reserves Program in 2012, the work is far from over. A program evaluation is set for 2023, when marine reserve implementation will be reviewed by the State. Ultimately, the evaluation will determine if and how marine reserves will continue to be used for supporting the sustainable management of Oregon’s waters in the future. 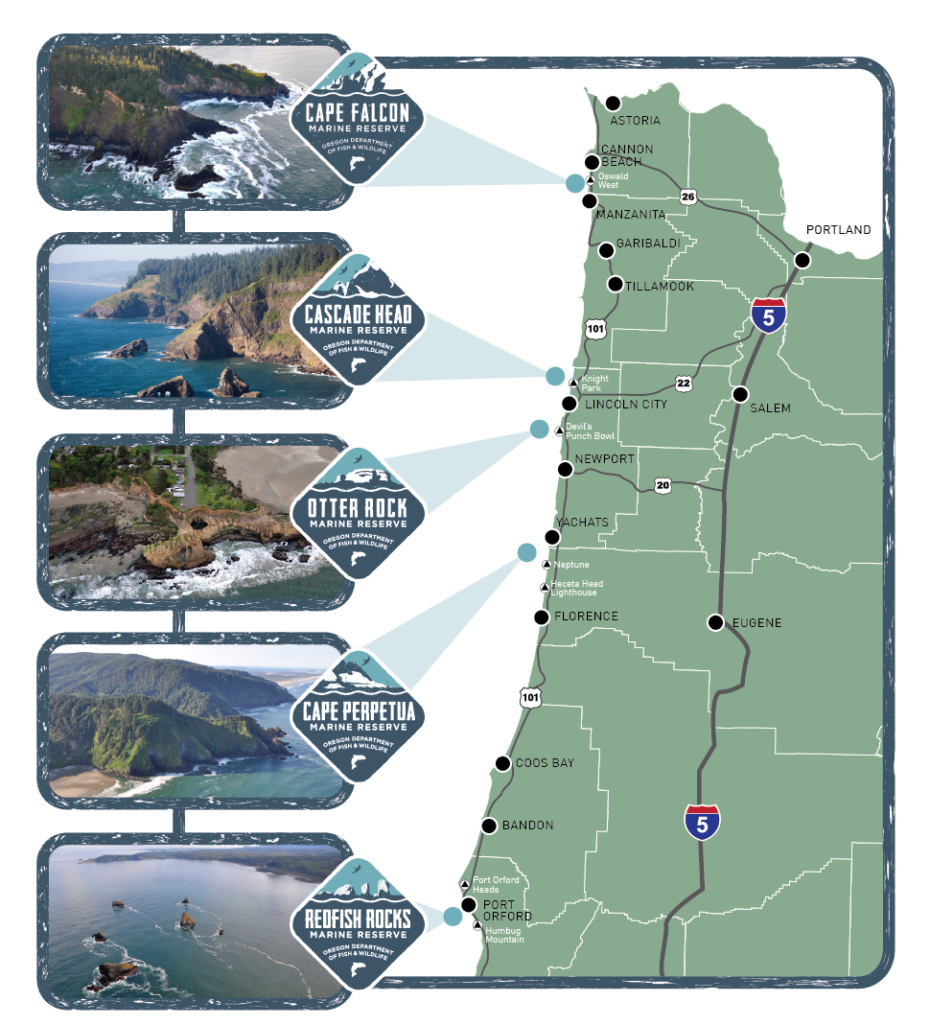 These areas in our coastal waters are dedicated to conservation and scientific research, where all ocean development and removal of species is prohibited. Oregon created the marine reserves to conserve marine habitats and biodiversity while serving as living laboratories to learn about Oregon’s nearshore ecosystems and the potential effects that protections can have over time.

In order to ascertain the effects of the reserves, key information is needed on the original species compositions of each area to establish a baseline i.e. what fish, invertebrate and plant species are there and how abundant are they? This knowledge provides a baseline for analyzing the effects of protecting the area over time.

How is some of this information collected?

And that’s where the Oregon Coast Aquarium comes in. ODFW is responsible for managing and monitoring Oregon’s reserves. They recognized that having an experienced dive team dedicated to regularly conducting dive surveys would be important for helping understand the long-term changes and conservation outcomes of the reserves over time.

“The Aquarium has the knowledge and experience of diving in Oregon’s nearshore waters, dedicated Dive Safety Officers, and a rigorous and excellent team of divers that support Aquarium operations,” said Dr. Lindsay Aylesworth, the Ecological Project Leader with the ODFW Marine Reserves Program. “It was a natural fit for us to partner with them. The Aquarium is also interested in contributing to marine research here in Oregon.”

That’s true. “We’ve been involved long before there was a Marine Reserve mandate from the state,” said Burke.  “Ultimately, we want to be as knowledgeable as we can about everything that is happening in Oregon’s ocean. We want to be there to make the firsthand observations, monitor changes over time, and collaborate with our partners locally. After all, the Pacific Ocean is literally in our backyard, and the conservation efforts start right here.”

In the last five years, the partnership between ODFW and the Aquarium has proved effective and built a strong framework for the future of the program.

In the coming years, the Oregon Coast Aquarium will continue to actively participate in the Marine Reserves Program and assist in local research and conservation projects wherever we can. And we always aim to do so. Our vision is to serve as a trusted resource for ocean education and conservation in the Pacific Northwest, and we strongly believe in leading by example— not just saying, but doing.