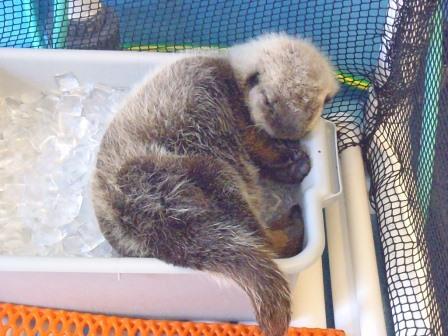 Newport, Oregon – Sea otters are a hot topic on the Oregon coast right now, for two reasons: First, the Oregon Coast Aquarium is announcing plans for a new sea otter holding facility. The facility will allow the Aquarium to care for additional rescued sea otters and facilitate new Behind the Scenes guest experiences.

Second, last month the Elakha Alliance, a non-profit organization dedicated to the restoration of sea otters on the Oregon coast, hosted the first Sea Otter Symposium in Newport, Oregon to discuss scientific understanding of sea otters and key questions about reintroduction in Oregon. “Elakha” is the Chinook Indian word for sea otter.

Sea otters were added to the federal Endangered Species List in 1977; fur traders hunted the marine mammals nearly to extinction in the 18th and 19th centuries. While strong populations of sea otters now live in California, Washington and Alaska, sea otters remain extinct in Oregon.

The Oregon Coast Aquarium is one of only thirteen rehabilitation facilities across North America authorized to accept rescued sea otters—but all are at full capacity. Currently, an injured or abandoned sea otter pup deemed non-releasable may have no facility available for intake, which can result in euthanasia. Circumstances could worsen if an unusual mortality event, such as an oil spill, resulted in a large number of animals requiring care and treatment.

The Oregon Coast Aquarium is currently home to three male sea otters, Nuka, Schuster and Oswald. In order to accept more of these threatened species, the Aquarium requires a separate holding area for quarantine and treatment. 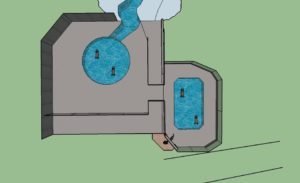 In collaboration with Oregon and U.S. Fish and Wildlife agencies, the Aquarium plans to build an additional sea otter holding facility. It will be placed adjacent to the current otter habitat and designed to facilitate Behind-the-Scenes guest experiences focused on sea otter natural history and future reintroduction research. This is part of a larger plan for the Aquarium to raise funds to build a Marine Wildlife Rehabilitation Center for Aquarium staff and veterinarians to provide critical care for injured or stranded marine animals as well as the permanent collection.

“If and when the time comes for sea otter reintroduction on the Oregon coast, additional animal facilities at the Aquarium can serve as areas for sea otter quarantine and holding for relocation” said Brittany Blades, Assistant Curator of Marine Mammals at the Oregon Coast Aquarium and Attendee to the Sea Otter Symposium.

“In the short term, the sea otter holding area will give us the ability to provide a home for an additional rescued sea otter pup that would otherwise have nowhere else to go.”

The Elakha Alliance’s Sea Otter Symposium highlighted the key areas of research needed to successfully reintroduce sea otters on the Oregon coast in the near future. Attendees included researchers, coastal tribe leaders, environmental organizations, policy-makers, sea otter-care experts and community groups from all over the Pacific Northwest. Speakers presented findings about the ecological roles of sea otters and their importance to coastal ecosystems, the status of genetic research on sea otters, the current state of sea otter populations on the West coast and current understanding of bull kelp, key habitat for sea otters, on the Oregon coast.

Robert Bailey, former Manager for the State of the Oregon Coastal Management Program and current Elakha Alliance Board Member, has taken on the role of Director since the passing more than two years ago of co-founder, Dave Hatch. Bailey says that the Alliance was formed with the mission of restoring sea otter populations to the Oregon coast and thereby restoring the ecosystem health of Oregon’s waters.

“Sea otters are an ultra-keystone species in coastal ecosystems. Their return to Oregon would restore ecosystem biodiversity and productivity,” said Bailey. “There’s no question about it—we’ve been living with an ecosystem that appears normal and healthy, but it is not what it was when sea otters were here.”

Evidence of the benefits of sea otters in nearshore coastal habitats has been measured in California’s kelp forests and estuarine habitats such as Elkhorn Slough near Santa Cruz, California. Researchers found that the addition of sea otters changed species interactions in these ecosystems to promote native vegetation growth, such as eelgrass, and helped offset negative effects of human-caused pollution.

While Oregon-based researchers can study habitat suitability for sea otter reintroduction, another key piece is community education. “With reintroduction, there will be concern by other ocean resource users that sea otters could outcompete them,” explained Bailey. “Part of it on our end is to understand that level of concern and to work to investigate and avoid potential impacts. For instance, we learned at the Symposium that there is no evidence that sea otters eat oysters—which is a question likely to arise from commercial oyster growers.”

The Sea Otter Symposium held by the Elakha Alliance was a critical first step toward potential sea otter reintroduction on the Oregon coast. “We are just beginning this journey by reaching out to scientists, agencies, zoos/aquariums and people with reintroduction expertise in Alaska and California to figure out the best path,” said Bailey. “But we’ve put our foot on the path, and we’re determined to see this through.”