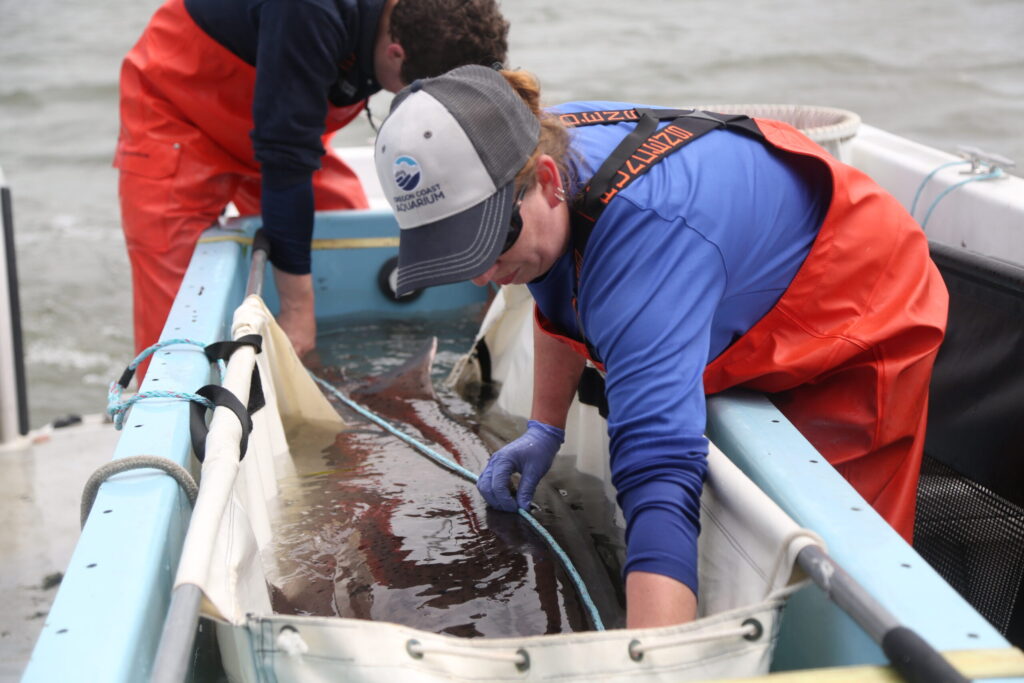 Newport, Oregon — The gulls’ raucous cries echo across the water of Willapa Bay. Sunlight coats the shoreline, the slick black rocks glistening in the dawn.

“This one looks pretty sharky.”

The words ring out loud and clear, and the entire crew feels a familiar spike of adrenaline. The air is charged with anticipation. All eyes are glued to the jerking motions of a buoy, attached to a line they had dropped no more than twenty minutes earlier.

Jim Burke, the Aquarium’s Director of Husbandry, deftly steers the Gracie Lynn towards a brightly colored float boasting a string of numbers and the word RESEARCH in thick black print. Burke goes over the key points once more: the crew would measure for length and girth, perform a muscle biopsy, tag the animal, and return it to the water.

“Our goal is to minimize the animal’s stress as much as possible, so we want to work as quickly as possible,” says Brittany Brady. As a Senior Aquarist and caretaker of the Oregon Coast Aquarium’s Open Sea habitat, Brady knows the fins and outs of sharks and understands the importance of keeping the animals under her care as calm and comfortable as she can.

At the surface of the water is a broadnose sevengill shark, Notorynchus cepedianus, measuring just over nine feet long.

“It’s a big female,” Brady says as she readies the winch. Lifting this animal would require mechanical assistance.

As Batson holds the line, Mefford and Burke slip a sling-style stretcher beneath the shark. They hoist it aboard, the stretcher bowing against the weight of the shark as they lower it into a saltwater vat. Burke removes the hook from the shark’s mouth in one fluid motion, and Brady quickly applies antiseptic.

The crew examines the shark, taking note of its condition. Batson and Mefford measure the sevengill from nose to tail, and around its body, right behind the pectoral fins. “Watch out for shark burn,” Brady says, only half joking as she records the data. The sevengill’s skin is like sandpaper, and can easily cause irritation.

Brady positions a hollow tool just to the left of the sevengill’s dorsal fin, and inserts it beneath the shark’s skin. She removes the tool and carefully puts the muscle sample into a small vial.

The tracking tag would go right next to the biopsy site. At a glance, the tag looks like a skinny, bright green glow stick; tiny but mighty, this piece of technology will provide crucial tracking data to researchers. Brady loads the tag into the hollow tool and repeats the action, and the length of visible tag nearly appears neon against the smoky, freckled backdrop of the sevengill’s skin.

Antiseptic is applied to the biopsy and tag sites, and to any other abrasions. The team slowly lowers the stretcher into the water and the sevengill swims away, the white speckles spattered across its back fading as it descends.

Click here to view a timelapse of the tagging.

Collaborative Research and Conservation Efforts at the Oregon Coast Aquarium

The Oregon Coast Aquarium, in collaboration with Oregon State University, the Seattle Aquarium, Aquarium of the Bay and Monterey Bay Aquarium, is actively participating in novel research of the broadnose sevengill shark. While broadnose sevengills are common to Oregon’s coastal waters, there is limited data on the life history and populations of this species. The muscle samples collected from sevengills undergo stable isotope analysis, which provides information on the shark’s environment and their diet, while the tracking tags provide insight into the animal’s movements. Ultimately, this data will allow researchers to make informed determinations about the status of the species, and will directly contribute to long-term conservation planning.

The Aquarium’s research and discovery efforts are not limited to tagging excursions. In order to further contribute to research surrounding sharks, the Aquarium’s scientific dive team, in collaboration with researchers at Oregon State University, deployed acoustic receivers on Oregon’s southern coast. The receivers will detect the presence of acoustically tagged animals, greatly expanding the ability to track target species across large stretches of coastline.

OCAq’s conservation efforts also focus on entire ecosystems; the Aquarium’s scientific dive team is a partner of the Oregon Kelp Alliance, a collaborative team of university researchers, professional scientific dive teams, and citizen science volunteers. The Oregon Kelp Alliance has been tasked with creating an inventory of kelp beds off the Oregon Coast, and creating and implementing recovery plans. To gather data, The Oregon Coast Aquarium research dive team, in collaboration with University of Oregon faculty researchers, recently hit the water. Thanks to contributions from the Oregon Wildlife Foundation, Dive Xtras, and Ocean Technology Systems, the dive team was able to visually document their findings using an underwater camera and diver propulsion vehicles.

Collaborative research is key to conservation; as ocean conservation is at the crux of the Oregon Coast Aquarium’s mission, OCAq will continue to contribute to these collective efforts. Together, we can take action to better understand and protect marine environments.