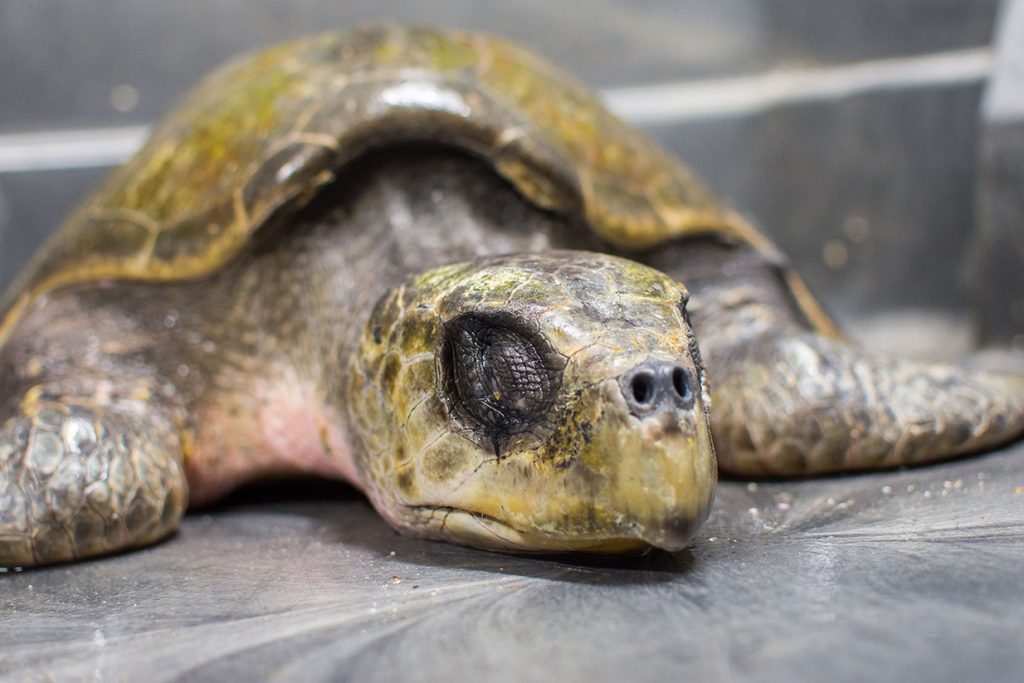 Key Message: If you find a sea turtle on the beach this winter, immediately note its location, remain nearby to observe it if possible, and contact the Oregon State Police Tipline at 800-452-7888 or the Marine Mammal Stranding Network (MMSN) in Oregon, Washington, and California at 1-866-767-6114.

Newport, Oregon – If you’re out walking the beach this winter, keep an eye open for stranded sea turtles. Winter storms and transitioning ocean conditions along the Pacific push sea turtles northward into colder waters, where they quickly grow weak and end up stranded on Northwest beaches.

“Sea turtles that are near our shoreline this time of year have become enveloped by colder water as the warmer summer currents dissipate and winter sets in here in the Northeastern Pacific,” said Jim Burke, Director of Animal Husbandry at the Oregon Coast Aquarium. “This environmental change slows the turtles down, which decreases their ability to migrate south, feed and maintain homeostasis. This can lead to dehydration, malnutrition and hypothermia as the animal physiologically shuts down. They then often become victim to the currents and waves, which can bring them crashing onto our beaches.”

The Oregon Coast Aquarium and Seattle Aquarium are the only rehabilitation facilities in the northwest United States authorized by the U.S. Fish & Wildlife Service to rehabilitate sea turtles. Pacific green sea turtles (Chelonia mydas) and olive ridley sea turtles (Lepidochelys olivacea) are two species that most commonly strand in the Pacific Northwest, and both are protected by the endangered species act.

A sea turtle was found stranded on the Oregon coast last week, but it was determined deceased upon arrival on the beach. Last year, the Aquarium treated the first sea turtle, a female olive ridley, on Thanksgiving. Two more turtles followed throughout the winter, but unfortunately, none of the large reptiles survived. Cold-stunned sea turtles present a myriad of complications that are difficult to diagnose and can remain hidden for some time.

The Aquarium’s past successful rehabilitation and releases of stranded sea turtles, although rarer, serve as evidence for the positive impacts of sea turtle rescue. The return of reproductively viable sea turtles back into wild endangered breeding populations can be critical for species recovery. And while cooperation among partner organizations and federal and state agencies is essential to rescue sea turtles—it begins with you.

If you find a sea turtle on the Oregon coast, immediately note its location, remain nearby to observe it if possible, and contact the Oregon State Police Tipline at 800-452-7888 or the Marine Mammal Stranding Network (MMSN) in Oregon, Washington, and California at 1-866-767-6114. The MMSN will act immediately to coordinate recovery and transportation for the sea turtle to the appropriate rehabilitation facility.