The “Blue Tide” is Upon Us… 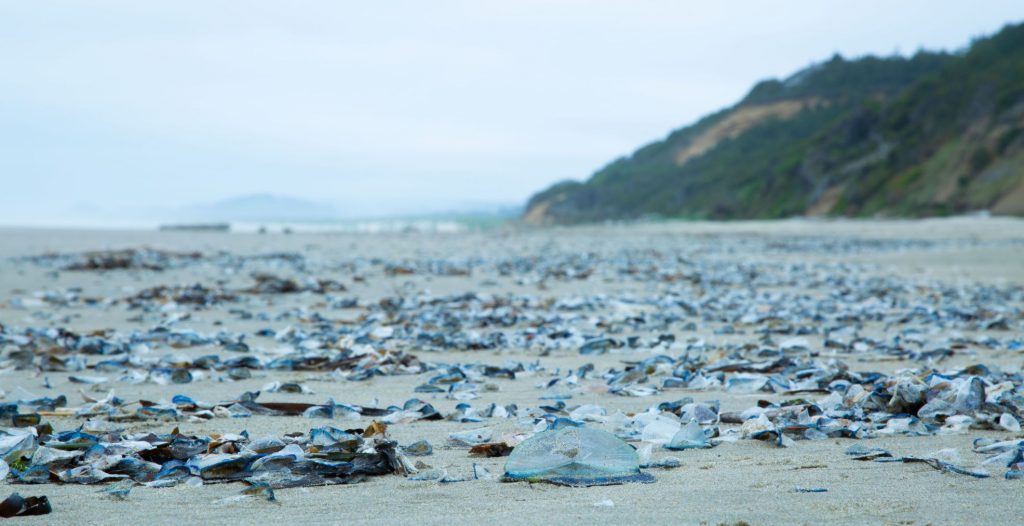 Newport, Oregon— The “Blue Tide” is upon us, as beaches all along the Oregon coast are strewn with an aquamarine layer of jelly-like organisms especially apparent at low tide. These are the innumerable bodies of by-the-wind sailors, formally known as Velella velella, and their strandings are a regular, yet fascinating late spring phenomenon in coastal Oregon.

By-the-wind sailors are hydrozoans, a class of predatory animals, distantly related to corals, sea anemones and jellies. They range in size from a few millimeters across to seven centimeters and appear brilliant blue and purple when at sea or freshly washed ashore. After time in the sun, the Velella dry out and lose their pigmentation. Beachgoers will often mistake the dried animals for thin, clear pieces of plastic.

The common name of these gelatinous creatures—by-the-wind sailor—refers to the clear, triangular sail at the top of the animal’s body which catches the wind and propels it across the surface. Short tentacles hang from the underside of the sail. Found in all the world’s oceans, these animals have no independent form of movement and will drift at the whim of the breeze. Their bodies have evolved to capitalize on prevailing winds, which differ depending on season and locality.

On our side of the North Pacific, the sails of Velella are set in a northwest-to-southeast direction to take advantage of regional wind patterns. With gentle winds, Velella sail at about a 45-degree angle in front of the wind, aiming always to be blown away from shore.

Despite Velella’s simple yet effective sail, heavier winds during the spring and summer months may nevertheless cause mass strandings of these animals. During such conditions, it isn’t uncommon to see miles and miles of Oregon beach carpeted with the stinking heaps of decaying Velella.

By-the-wind-sailors are not singular organisms but in fact colonies of animals. Each Velella is a colony of all-male or all-female individuals (called polyps), which are divided into separate groups within the colony. Some polyps specialize in feeding and reproduction, while others protect the colony and provide structural support.

Velella feed by stinging and capturing plankton with barb-tipped cells contained within their tentacles. The venom is considered harmless to human beings, but beachcombers are cautioned not to touch any jellies or jelly-like animals found washed up on shore, as some may react more strongly to the venom than others. (Other, more dangerous jellies like sea nettles might also be mixed in with Velella.)

Visitors walking the beaches in the next few weeks should enjoy these incredible creatures safely while their aquamarine hues last—they won’t look that good for long, and they’ll soon smell much worse!