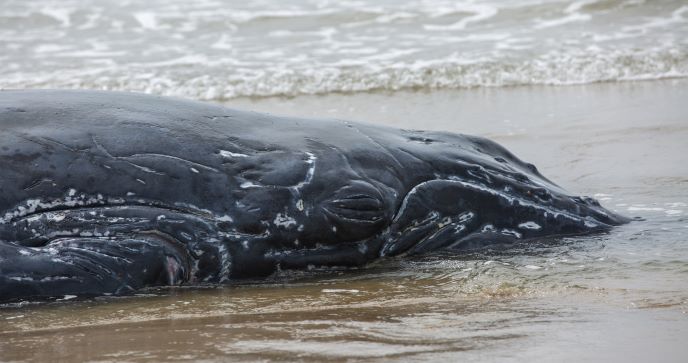 Newport, Oregon— A 20’ juvenile humpback whale (Megaptera novaeangliae) that washed ashore north of the Alsea River near Waldport on Wednesday, August 14 was euthanized. A team organized by the Oregon State University-based Oregon Marine Mammal Stranding Network (OMMSN), including the Oregon Coast Aquarium and in collaboration with the federal National Oceanic and Atmospheric Administration, euthanized the whale with an injection.

OSU Marine Mammal Institute (MMI) staff and students immediately responded to the scene on Wednesday to assess the situation and keep beachgoers from approaching the whale. The whale did not make it back to the ocean after the mid-day high tide on Wednesday, so Oregon Coast Aquarium staff arrived early afternoon to help MMI staff dig a trench and keep the whale wet until the next high tide at 1 AM on Thursday.

MMI staff and students, Oregon State Park beach rangers and Aquarium staff set up a barrier around the perimeter of the whale with informational signs to prevent beachgoers from approaching. Staff then coordinated two hour shifts to keep watch over the site until 2 AM this morning.

Unfortunately, the whale did not make it back at the 1 AM high tide on Thursday.

Brittany Blades, Oregon Coast Aquarium Curator of Mammals, stayed overnight to monitor the whale. “The whale exerted a lot of effort to swim past the sandbar to deep enough water. Unfortunately, every time the whale oriented itself toward the ocean, it would get pushed broadsided to the waves and come closer to shore,” said Blades. “As the night went on, the whale stranded further on shore due to the strong waves and extremely high tide.”

Stranding specialists on the team consulted with colleagues nationwide and determined euthanizing it was the only humane option. The team also considered trying to move the animal closer to the water or give high tides another chance, but neither alternative was deemed feasible.

“Due to the size of the whale and amount of time spent stranded on land, it is likely that the internal organs suffered irreparable damage that is not externally apparent,” said Blades.

After a necropsy to gather important data on whale biology and the cause of stranding, a state park contractor will bury it on the beach near the site.

It is absolutely essential that the public maintain distance from the animal and keep dogs leashed. Federal and state laws prohibit touching, feeding or disturbing marine mammals with up to a $25,000 fine. Keeping your distance is the best thing you can do to help stranded whales while authorized responders take action.

The United States listed humpback whales as endangered in the United States under the Endangered Species Act in 1973. They are distinguished from gray whales by their dark color and long pectoral fins, and individuals can be identified by their unique tail fluke patterns.