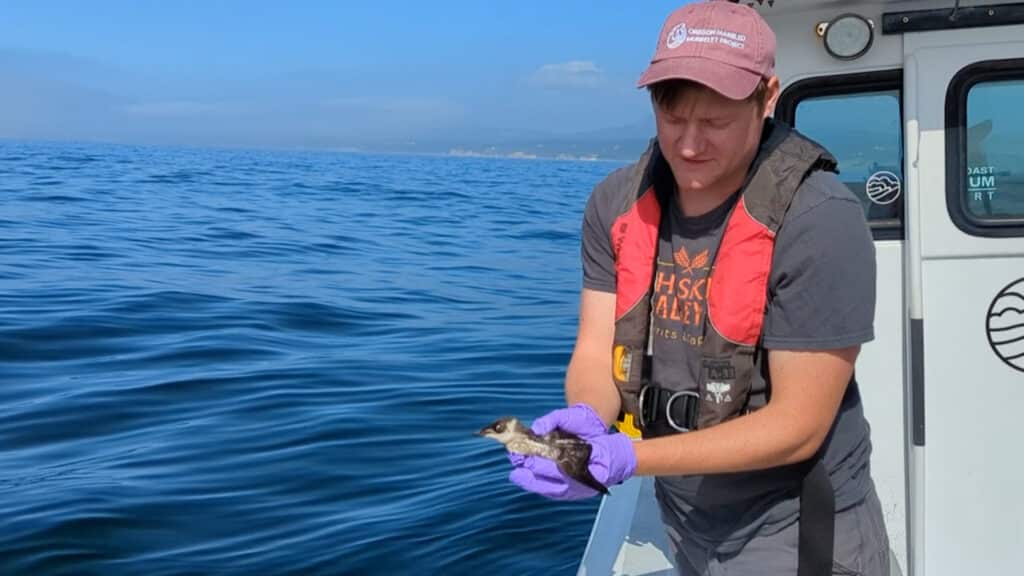 The marbled murrelet, Brachyramphus marmoratus, has faced rapid population declines due to habitat loss and pollution, and is listed as threatened under both the Federal and State Endangered Species Act. Thanks to the dedicated efforts of volunteers and wildlife professionals, one of these vulnerable seabirds was successfully rehabilitated and released after it was found grounded on the forest floor.

Marbled murrelets range from Alaska to California, and spend much of their life adrift in the North Pacific, only coming inland to brood in coastal old-growth forests. Little was known about the nesting habits of these birds until the 1970s, and even current data is limited.  Their nests are near-indistinguishable; rather than a twill of twigs, marbled murrelets lay their eggs in shallow depressions atop moss-covered branches, hundreds of feet in the air.

“These birds really only leave the ocean to nest, so it is not normal for a murrelet to be on the beach or on the forest floor,” said Jonathan Dachenhaus, OMMP Faculty Research Assistant. “They need a lot of momentum to be able to fly, so it’s not likely that they will be able to fly on their own once grounded.”

The Oregon Marbled Murrelet Program was initiated by the Oregon State University College of Forestry, with the aim to learn more about space use and reproductive success of marbled murrelets in Oregon. The OMMP field research team was initially concerned when they observed an empty nest on a routine monitoring check in the Suislaw National Forest, but discovered the grounded chick nearby still alive and alert. The team examined the bird and transported it to OCAq.

The team noted the chick was in good condition with no obvious injuries from the fall. The chick’s down feathers formed a thick mottled gray mane around its neck, and weighing a mere 98 grams, it could easily be mistaken as another clump of moss on the forest floor. The bird was likely near fledging age, as its primary feathers were just visible beneath the layer of plush down. The OMMP team transported the chick to the Oregon Coast Aquarium, where it was given an intake exam and offered food. Aquarium aviculturists agreed that while the bird was in good condition, it would require additional care. The Aquarium often partners with other facilities to provide long-term care for vulnerable animals, and after the murrelet was cleared for transport, volunteers took the bird to the Wildlife Center of the North Coast, located in Astoria, OR.

Upon its arrival to WCNC, the chick underwent additional exams, weight and temperature checks, received fluids, and was housed in an incubator for warmth until its temperature stabilized. The bird’s prognosis was bright: while an animal’s condition can change in a moment, the chick was full of life, and the WCNC team was optimistic.

WCNC staff monitored the chick round the clock, and placed a small camera in its housing to observe the bird while minimizing its stress. Staff watched as the stout chick vigorously flapped its wings: a typical behavior for a healthy bird on the verge of fledging.

Before the murrelet could be released, it needed to reach two vital milestones: it had to be able to feed itself, and it needed to be waterproof.

“It was a true team effort,” said Ginger Nealon, WCNC Wildlife Rehabilitator. “WCNC is so grateful to have had an opportunity to collaborate with OCAq and OSU’s MMP on this patient’s care.”

The WCNC team fed the bird small slivers of herring several times daily until the bird began to take food on its own; with that milestone reached, the team focused on waterproofing.

When birds preen, they distribute oil from an oil gland all over their feathers. Their feathers act as a layer of insulation, trapping air around their body while keeping water out. It is essential that a seabird’s feathers can remain dry while in the water; without this waterproofing, the bird can’t maintain its body temperature.

When a patient’s feathers are too contaminated for preening to be effective, WCNC staff wash the bird with a soapy solution to remove all of the oil on its feathers, allowing the bird to start preening effectively. Newly washed and properly preened, the murrelet was completely waterproof just a few short days later.

Volunteers transported the marbled murrelet back to the Oregon Coast Aquarium, where the research vessel Gracie Lynn was already prepped and ready to go. The OMMP team put an identification band on the bird’s right leg and took a final weight: from discovery to release, the bird had gained 22 grams.

The Gracie Lynn set out for the open ocean off of Yaquina Head–the water was calm and the sky clear and bright; the team soon spotted other marbled murrelets, their squat profiles bobbing along the waves.

The vessel came to a halt, and the bird’s crate was opened. Dachenhaus cupped the bird in his hands. With a gentle upward lift, the bird soared: four weeks after its discovery at the base of its nest tree, the marbled murrelet reached the sea.

Wildlife Center of the North Coast is a non-profit wildlife hospital in Astoria, Oregon committed to promoting compassion, empathy, and respect for all life through wildlife rehabilitation, ecological teachings, and wildlife conservation. Over the past 25 years, WCNC has rescued thousands of animals and provided educational opportunities to hundreds of community members on the north Oregon Coast. We specialize in wildlife rehabilitation of native and migratory birds, mammals, and other creatures naturally occurring in Oregon, and receive an average of 1,000 patients annually. We work hard to provide them with the care needed to get them healthy and released back into their appropriate habitat. We have a small, dedicated staff and depend on our amazing volunteer team and generous friends like you to continue the lifesaving work we love. Learn more at coastwildlife.org.

The Oregon Marbled Murrelet Program was initiated by the Oregon State University College of Forestry, with the aim to learn more about space use and reproductive success of marbled murrelets in Oregon. OMMP’s mission is to provide new scientific information that advances our understanding of the breeding habitat requirements of Marbled Murrelets in Oregon and informs conservation and forest management planning within our coastal forests. Learn more at oregonmurrelet.org.