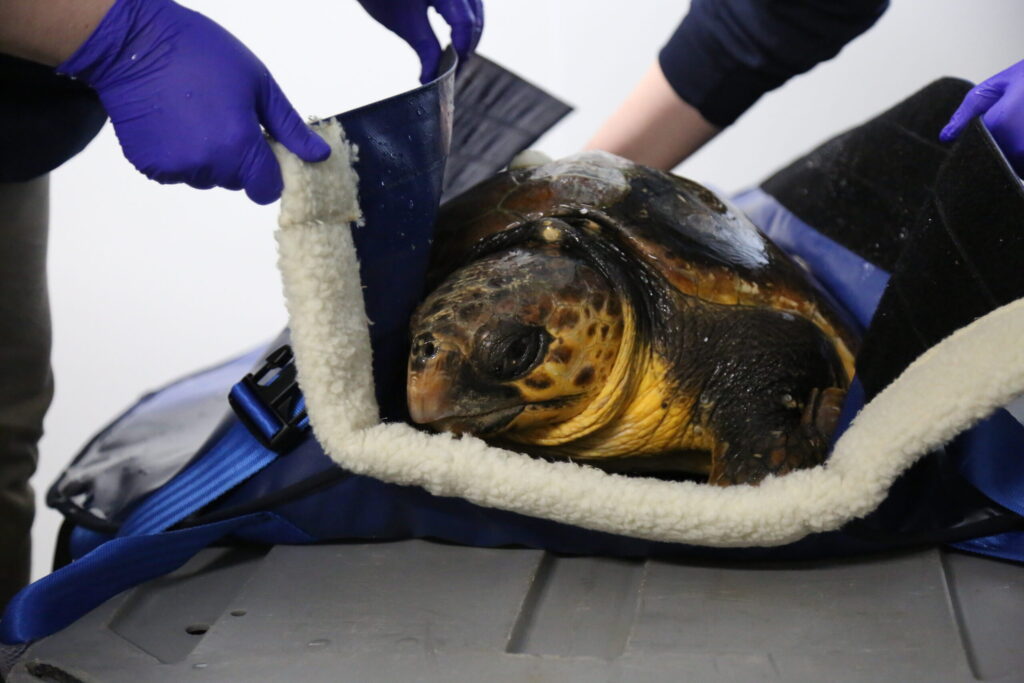 The turtle was identified as a loggerhead—uncommon, but not unheard of on our coast. As with most turtle strandings on the Oregon Coast, the animal was caught up in our cold waters, quickly losing the ability to eat or move. Cold-stunned turtles are at the mercy of the waves until they wash ashore.

During standard triage protocols, it was determined that the turtle was a sub-adult female, not yet fully mature.  While she was alert and able to raise her head for breaths, her temperature registered as 50°F. The normal temperature for a turtle is around 75°F.

Thus began the delicate process of bringing the cold-stunned turtle back up to the appropriate temperature.

In order to avoid shocking the turtle’s systems, the temperature must be raised slowly and gradually; about five degrees per day. The process involves transferring the turtle to increasingly warm water baths, with constant monitoring to ensure the turtle is comfortable and breathing.

Blood samples and x-rays were taken to assess the turtle’s internal status; the prognosis was hopeful but guarded. In instances such as these, a turtle’s condition can change in a moment.

As the turtle’s temperature increased, she displayed signs of stability. She became curious and began actively swimming; she even attempted to dive and forage for food. About a week after her arrival she ate for the first time: a salmon filet.

After much collaboration between Mochon-Collura, OCAq’s Director of Husbandry Jim Burke, and Dr. Julianne Vickstrom of West Hills Animal Hospital, it was determined that the loggerhead was ready to move on to the next step in her care.

The Oregon Coast Aquarium performs triage on stranded turtles, but for long-term care and rehabilitation/release, they must be transported elsewhere. In this case, SeaWorld San Diego.

It takes a coordinated effort to transport a sea turtle. Winter road conditions can make driving too risky for both the turtle and staff, and the longer the turtle is in transport the more likely it is to become cold and stressed.

The Oregon Coast Aquarium has built a relationship with a non-profit organization called Turtles Fly Too. The network’s mission is to coordinate and facilitate the use of general aviation to transport endangered species, critical response teams, and to educate the community on marine life conservation.

After receiving confirmation that SeaWorld staff was prepared to take her in, a flight was coordinated between OCAq staff and a volunteer pilot to transport the loggerhead to SeaWorld San Diego.

Before transport, the loggerhead was given a final exam, covered in lubricant to prevent dehydration, and strapped into a custom stretcher designed to keep her warm and secure.

The dedicated and aptly dubbed “Turtle Team” oversaw the transport, ensuring the turtle’s comfort before taking flight. OCAq Aquarists Tiffany Rudek and Savannah Dodds worked quickly to secure the turtle in her stretcher and transportation crate, while Mochon-Collura and Burke ensured the operation went as planned. Dr. Vickstrom looked on, keeping a close eye on her patient.

The pilot reported good news: a favorable tailwind would reduce the trip’s duration by an hour. To maintain stability and minimize stress, the less time the turtle spent in transport the better. After refueling, the pilot strapped the crate in, ensuring the precious cargo would stay in place.

As the plane took flight, the team waved goodbye.

“I just received a video from SeaWorld San Diego,” reported Mochon-Collura a short time later. “The loggerhead is swimming in their large outdoor pool—a successful triage and transport!”

SeaWorld staff will continue to assess the animal’s condition and work toward her eventual release. The reintroduction of even one turtle is enough to impact the overall population. This loggerhead’s journey is far from over; thanks to the combined efforts of dedicated volunteers and staff, the next chapter of her story is just beginning.

If you find a sea turtle on the beach, immediately note its location, remain nearby to observe it, and contact the Oregon State Police Tipline at 800-452-7888 or the Marine Mammal Stranding Network (MMSN) in Oregon, Washington, and California at 1-866-767-6114.

When stranded turtles are reported and transported to the Aquarium, Aquarium staff assess the animal and take measures to stabilize it, with the ultimate goal of rehabilitation and release. While odds of successful rehabilitation may be low, the Aquarium will continue these efforts to save endangered species, with the hope that even one saved turtle can help species recovery.

The ultimate goal of the triage and transport efforts surrounding the loggerhead was rehabilitation and eventual release. 7 months later, OCAq is thrilled to report that that goal has been reached. The loggerhead, dubbed Ruth, was released into warm waters off the coast in La Jolla by the SeaWorld Rescue team in early September. NOAA provided SeaWorld with a satellite tag to track the movements of the rescued turtle. Ruth’s successful return to the ocean speaks to the dedication and collaborative efforts of veterinary/care staff, wildlife professionals, and volunteers alike.

“Our team is proud of the medical triage and critical care that we are able to provide to these cold stunned and stranded sea turtles,” said Jim Burke, OCAq’s Director of Husbandry. “These animals occasionally arrive on our beaches and are usually physiologically compromised when they do. It is through a very solid collaborative effort with SeaWorld, USFW, NOAA, Oregon State University Stranding Network, and Turtles Fly Too that we are able to get an endangered species back on track and into the breeding population.”